ALEXA DREY – The Veils of Lamerell

A LitRPG Novel by Ember Lane

My name is Alexa Drey. I recently entered cryogenic suspension aboard the colony ship Spear Of Light bound for the settlement planet, Celleron. During the long journey I was to be immersed in a virtual reality game to keep my mind sharp. I was skeptical, to say the least—having never played one before.

The game was based in a world called Barakdor.

On the first day, I felt the overpowering feeling of leveling up my character. It was euphoric, ecstasy, a completion of my soul.

It is a sensation I now crave for.

On the second day, I forgot any other life existed.

My name is Alexa Drey.

Read the preceding book from the Land of Barakdor: THE LEGACY BUILDER – The Chronicles of Lincoln Hart. See more information and get access to the free sample here>

Barakdor Book 2 - The Veils of Lamerell is now available on Audible. Listen to Stephanie Dillard as she superbly brings Alexa Drey to life with her engaging performance. 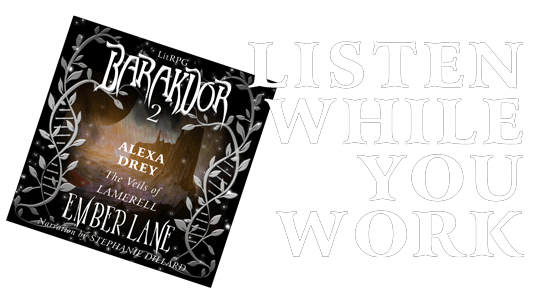